Some thoughts on law in fantasy settings

In this post I'm gonna tell you why you have to chop your player's hands off.
So if you start up Skyrim, you're playing what is called "fantasy". There's a lot of shit here that does not pretend to be real. In fact that's why people play it. There's dragons and trolls and there's magical powers everywhere.

I've written before that "religion" in fantasy kind of shows that we take some things that really are arbitrary - such as the concept of "religion" as being belief in gods - as universal.

I argue that our response to a fictional world shows that we have two kinds of normal.

The first is VISIBLE NORMALITY. This is the things we find normal but that we understand are arbitrary. For example, the clothing people wear in Skyrim is not something I'd ever wear, and the gods they worship are not gods I'd ever worship. My clothing is normal to me but I understand it is different for other people and *would* be different in an alternate, fictional world.

The second is INVISIBLE NORMALITY. This is things we find normal but we do not even know could be different. They are self-evident, taken-for-granted, hiding-in-plain-sight. So, understanding that fictional people in a fictional world would not worship Christ shows that we consider worshipping Christ a VISIBLE NORMALITY. But, the fact that all fictional religions revolve around worshipping gods shows that we think of "religion" as "worshipping gods" as INVISIBLE NORMALITY. We do not even realize that it does not have to be that way. We think that is universal, necessary. In Skyrim, I can play as a cat-person. But I cannot play as someone who is non-binary, for example.

These are things that are normal to me and that I *don't* understand are different for other people and *would* be different in an alternate, fictional world.

Religion and gender in Skyrim shows that they are invisible normalities. When constructing the weird fantasy world, the creators just skipped over these because they did not see them, did not consider them candidates for potential difference or fantasy.

I argue, dear reader, that "guards" in fantasy show how the police are an example of invisible normality. These guards function exactly like cops and seem not to have been subject to serious thought at all - they are transplanted wholesale from contemporary society. Of course there are cops. Cops are an inescapable part of reality. Skyrim has gravity, therefore it must have cops.

But the cops have only existed for like 200 years. Before that, law enforcement was entirely different. The town watch, for example, was much more about *watching*. They kept an eye on things and would alert others if necessary. They did not perform arrests, AFAIK. In Medieval law, the cry "stop thief!" was not just a cool thing for people in cartoons to yell. If you did that, every single person in the community had a duty to stop the thief. There were no designated thief-catchers like we imagine the cops to be.
In addition, people were sometimes put in groups of ten. If any of the ten broke the law, it was the responsibility of the other nine to take him to court.
So law enforcement wasn't a profession. It was something everybody did. It was a very social type of phenomenon. Communities policed themselves.
So why are all these fantasy settings crawling with "city guards" who are just modern day cops wearing armour?
Where am I going with this? Well, obviously the intent here is to imagine more types of fantasy worlds.

Table of a Thousand Cults 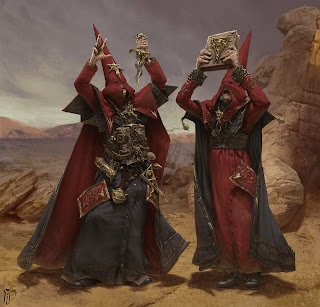